You've got your computer in your office, but fancy watching more than just the iPlayer or a live feed of the BBC channels. In steps the Elgato EyeTV Diversity Dual-Tuner DVB-T Stick hoping to turn your humble Mac into a fully-fledged personal video recorder. About twice the width of a mobile broadband dongle, the Elgato EyeTV Diversity Dual-Tuner DVB-T stick is simple in its design and offering. You get a USB connector at one end, two TV aerial connections at the other. There is a status light for good measure, but that's it. The rest is either on the accompanying remote control or built-in to the software. Like many such USB devices, if your USB sockets are close together, you’ll find that the Diversity blocks access.

Luckily there is a USB cable supplied in the box that neatly steps around this problem. With little to the hardware the main focus is in the software.

Like other Elgato products, the EyeTV Diversity uses the EyeTV 3.0, here, however, you get the power of two tuners to play with. The result is that you can record one channel and watch another at the same time. It might come with portable aerials in the box, but to be honest you might as well throw them in the bin. They really are no good unless you live in an area with a strong digital signal. We tried in a number of locations around the UK and failed every time. The biggest problem with digital signals is that, unlike analogue, if you don't have a signal you get nothing at all. Luckily unlike the DTT Deluxe this isn't designed to be an ultra-portable offering so the fact that it won't work on the road isn't such an issue but is something to bear in mind.

This won't for example be your entertainment saver on that caravan or camping trip. The software allows you to obviously watch television, but beyond general viewing you get Sky+ features like pause, rewind and fast forward. Furthermore you can set the software to record your favourite program. Like standard PVRs you can also automatically set the pre- and post-record lengths so you never miss the start or finish to your programme. Everything is controlled via the software interface or for those who really are too lazy to click a mouse button, a standard looking TV remote that’s bundled in the box. To help you work out what's on when there is an EPG available, however this only last for a year before costing you £15. We especially like the export to iPod mode, which will export the recording to an iPod friendly format leaving you with the task of having to transfer it to your iPod and little else.

Better still the software also allows you to stream recordings via the software to the Safari browser on an iPod touch, iPhone or other Mac via your local wireless network. It's a great feature for those of you wanting to watch stuff in bed away from your computer in another room, and turns the software into much more than just another TV tuner with recording function.

Click to expand.Firstly, my apologies for such a late late reply. This is a bit of a long post so please bear with me. Not sure if you are still looking for answers to your query above, but just thought I'd share my experience. I've been a long time MediaPortal user, and my MP setup was on a Shuttle XPC, running Windows 7, MP v1.10.0. I have a Hauppauge HVR-3000 PCI Hybrid tuner card installed in the XPC, and it worked fine in MP.

I've also managed to install and use XBMC/Kodi as my HTPC Front End with TV-Server as the PVR backend. I also have a couple of Macs (iMacs and Macbook Pro), and installed XBMC/Kodi on the Mac and connecting to my XPC PVR backend, that worked. A little while ago, I had to spend a lot of time away from home (no direct connection to my XPC), and as such purchased an Elgato EyeTV Diversity for watching DVB-T TV on my Macbook Pro while I was away from home. That again, worked fine - it is independent from my MP setup and has got nothing to do with MP. Recently, and only thought about it recently, I decided to try and see if I can get the EyeTV to work with MP, as I always thought Elgato products are made for Macs and they didn't have PC support.

To my surprise, when I Googled this matter, I found out that Elgato do have Windows drivers for the EyeTV USB tuner sticks, which will work with Windows 7 and Windows 8. I downloaded the drivers, installed it, and got it recognised in my Windows 7 system. When I subsequently fired up TV Server configuration, I found that the EyeTV is now listed as one of the available tuners in TV Server too. I mamage to scan for channels via that tuner, and am happy to report that I managed to set it up as an additional tuner on my TV Server. As an added bonus, because I have the EyeTV Diversity, it is effectively 2 tuners in one, and is recognised as such in TV Server. 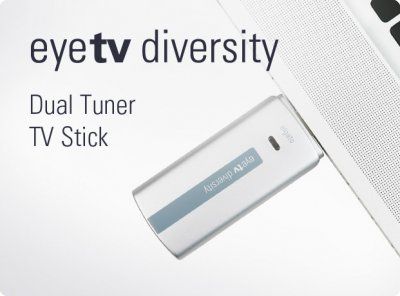 Together my the Hauppauge HVR-3000 card in the shuttle, I now have 3x independent TV tuners. I have tested it - watching a programme, recording another, and using XBMC/Kodi on my Mac to stream remotely yet another program. All works - granted my XPC is struggling to cope but I believe that is because of the prosessing power of the PC and nothing to do with TV Server. So, if summary, whilst the product you mentioned above it slightly different, I think it could work given my experience.