I am trying to buy a new external hard drive. My current 500gb WD is about to die. I currently use usb 2.0, but I am interested in firewire since I transfer large image file often. I was interested in WD my studio with firewire, I purchased a WD passport my studio and experienced problems with it unmounting/shutting off while transferring, so I returned it. After some research it appears that EVERY hard drive that uses firewire randomly unmounts/shuts off?! I have read a lot of reviews on WD, Seagate, and Lacie drives and all have some complaints of this same problem.

Does anyone actually have a firewire drive that works and is reliable. If the drive randomly unmounts, I do not consider this reliable. Any help/recommendations would be great. Only some of this will be applicable: After Taking Part in Numerous Threads and Purchasing Numerous Drives after Research, I have come to a couple of suggestions and a massive 'guide.'

There are three (basic/main) parts to the speed of your external drive: 1. Connection Type – This is the one most people will know about, if they know one. Things like Firewire 800, Firewire 400, USB 2.0, eSata, etc. It comes to how your drive connects to the computer, in general (fastest to slowest) eSata, Firewire 800, Firewire 400, USB 2.0. Firewire is preferable because it is not only faster then USB, but it transfers at a constant speed, whereas USB is variable.

ESata is the fastest but it requires a port that is not available without an adaptor, and those adaptors are hit and miss in terms of quality. Chances are most users will do fine with Firewire 800 and have no need for eSata. Hard Drive Speed – For some reason people seem to forget that if you have 4200 RPM Drive inside your enclosure, it's going to be slow. This depends on the physical drives inside your enclosure. Speed from fastest to slowest: SSD, 7200 RPM, 5400 RPM, 4200 RPM. The higher the revolutions per minute, the faster, unless there are no revolutions at all.

Cache – The one people forget. The cache is just like your computer stores the information temporarily. It is important that if you look at this, especially if you are going to try to play files from your drive. Even if you are using it is a back-up, you don't want a 4MB Cache. Higher the cache the better; 64MB is the general highest speed for most stock drives. As much as I was happy buying a G-Tech, I bought my G-Raid was the assumption that one of my other drives would fail like I read about online, every drive I have owned has worked flawlessly, so for me the G-Tech was not really completely worth it. But everyone has their own experiences, but I imagine that most of them are positive.

Sure, there are these threads about how person x's drive failed and person y wouldn't buy anything but them. I own three drives that there are plenty of horror stories about. For the most part no one is going to post 'I Love My Drive' unless two things occur. They just purchased the drive – hard drives fail, if it worked out of the box, that's a good thing; but, to give a positive rating takes at a bare minimum six months, if not a year in my book.

Someone said that Drive is bad. Remember these companies ship millions of drives. Western Digital, Seagate and Hitatchi all make tons of drives internal and external; a couple of users are going to have some problems, but for the most part – most customers drives probably work. The best advice is to find one that has a good warranty and excellent customer service. And then avoid reading these threads so you don't lose any sleep. Click to expand.Personally I'd recommend DYI, but that's also because I upgrade drives so quickly, buying OEM externals would mean voiding warranties. I'm also very specific with build quality and chipset usage.

Oxford chips are the best and I think it's been proven (not by me). I usually look for OEM version of name-brand drives.

If you like RAID drives, Macpower sells OEM version of the ones that OWC sell for about twice as much. In these cases I'm not sure how the warranty would work, but that's also because I've never had any enclosures with quality chipsets go bad on me.knock on wood. Click to expand.The Drobo is terribly slow and it uses their own algorithm. The good part is the mix-and-match, but the drawback to that if the enclosure were to fail, you could lose your data (since the storage method is proprietary). If you end up buying the biggest disks anyways, the Drobo wouldn't be a good choice either since the point is to mix.

All-in-all, I wouldn't get the Drobo. I should also mention with something like RAID-5, you get about 75% to of the space; with the Drobo you get around 66% which isn't really efficient at all. You also get about the a quarter the speed. That's not the mention you have to spend about $400 up-front for just the enclosure. Click to expand.//sigh I hope you have better luck than I did.

I've had a power supply faliure on my G-Tech Quad and I had to send my G-Raid mini in for an entire month (several 'we are sending it out tommorow promise!' 's later) after they promised 5-7 day turn around after the drive broke down three months after purchase (total usage about one month lightly) and took my data along with it. The drives work OK so far but it'll be a very long time before I buy another g-tech product. I bought them because Apple uses them in alot of their print advertising and the genius bar also uses them (plus they look great), but is your data worth it? Make sure you read here to look at products which may give you the most trouble. Click to expand.thegoldenmackid, Your guide is very helpful. Here is another data point for you to take into consideration.

I got an Iomega MiniMax 1 TB a few weeks ago. Other than the flashing LED when accessing the drive (annoying at night when Time Machine goes off) it is great. It has Firewire 400 and USB 2, with a USB hub built in. It is also the same form factor as a Mini, and includes a Firewire patch cable, a USB patch cable and a really short Firewire cable for use if you are stacking it with a Mini.

I got it d at Fry's for 118, a bit higher than USB only externals, a bit cheaper than most of the combo drives there. Probably higher than mail order, but I needed a 2nd backup drive, and the Firewire was nice for the initial Time Machine backup, then I switched it over to USB to utilize the built in hub for my camera, and iPhone. Just food for thought. Click to expand.I've had problems with three of them now, though not the mac branded version (no need to pay more when you can just reformat yourself). I took them apart and it is indeed the controller in each of them that was faulty, as the drives had no problem when I connected via another barebones controller we had in the office. 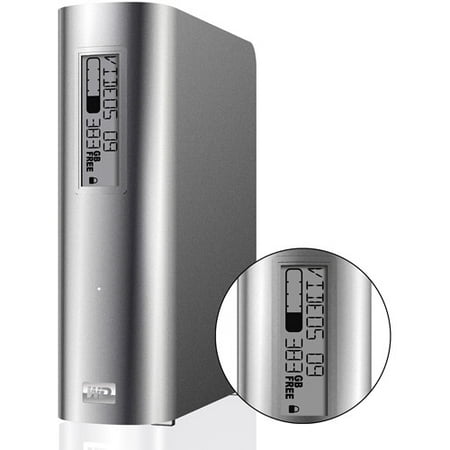 I've lost trust in WD, two of those drives were refurbished and passed inspection. Every time I hit anywhere from 9GB to 15GB transferred, they just unexpectantly disconnected. I get that I may just have bad luck, but why not go with another much more trusted option for roughly the same price?